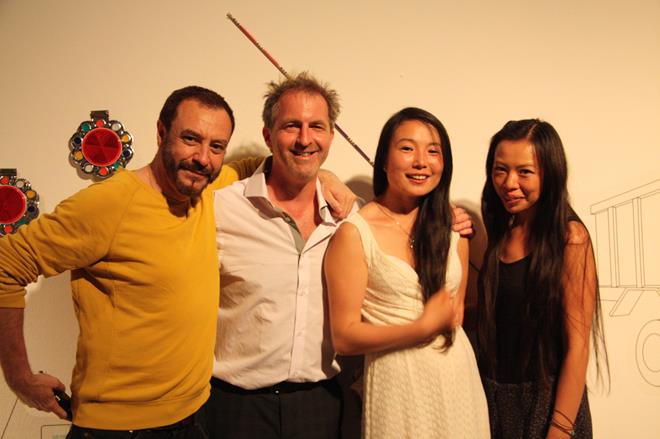 We’ve been hard at work creating a new musical about long-term unemployment (yes, you read that right!) with Seiriol Davies and Company of Angels called We Are Scroungers.

We have also established the Adah Kay Memorial Commission. In honour of Adah – a writer, anthropologist, urban planner and lifelong activist – and with support from the Norton Trust, this annual commission aims to build on Adah’s legacy with ice&fire, using theatre as a means to communicate some of the most important and under-represented stories.

In July, we presented My Skype Family in collaboration with the Joint Council for the Welfare of Immigrants. The families whose stories feature in the script came along – the photo above is one of the couples with their actor counterparts. We’re planning more activity with this piece around the Supreme Court decision on Family Migration rules next year.

In August, we appointed a new Director of Actors for Human Rights, Charlotte George, who is focusing on targeting ‘hard to reach’ audiences. We want to perform to a range of professionals whose practices could be improved by being exposed to the human stories behind the headlines. If you know anyone who trains statutory sector staff, or have ideas for conferences/events we can approach, please get in touch!

The Actors for Human Rights Residents – a group of committed actor/activists – will work with us to reach new audiences, develop work and recruit actors. The group is London-based for now, but we want to create a similar Residents group in other regions in 2016.

Our residency at Room to Heal has been running since February, working with a group of six adult asylum seekers using a range of techniques to explore their personal creative expression. We’ll be organising a showing of some of the work next year. Some of the feedback from participants so far:

Our next production, The Island Nation, will premiere in October 2016 at the Arcola Theatre. You’ll hear more about it soon, but we can announce the immensely talented Ria Parry will be directing.

We’re also developing a new music theatre piece with Freedom from Torture and singer/songwriter/composer Ana Silvera, which will be seen at the Roundhouse in June.

We have loads of bookings for Actors for Human Rights readings in 2016 and an exciting new commission from Amnesty International.

In staff news, we’re very sad to say goodbye to Annecy Hayes who has been with us as Creative Producer for nigh on 5 years. She will stay connected with us through various projects as an Associate Artist.

We’re pleased to announce that Zoe Lafferty (recently named one of the Old Vic 12) is our new Creative Producer. Zoe creates new productions which have a focus around current conflicts, political power imbalance and situations of human rights violations. She has worked for many years with The Freedom Theatre in Palestine and her productions have been performed world wide.

We’re also lucky to have Helen Clapp on board as our Administrator. As well as being a brilliant actor, Helen is one of our most active Actors for Human Rights members and is a member of the Residents.

We’re hugely grateful to those of you who make regular donations to ice&fire throughout the year and we would like to call on the enormous generosity of our supporters to make a one-off or regular donation to us. We’ve got a huge programme planned for 2016 and after a few recent unsuccessful funding bids, we could do with all the help we can get at the moment. Thank you!

Click here for more information about a performance near you.

Come and have a chat!